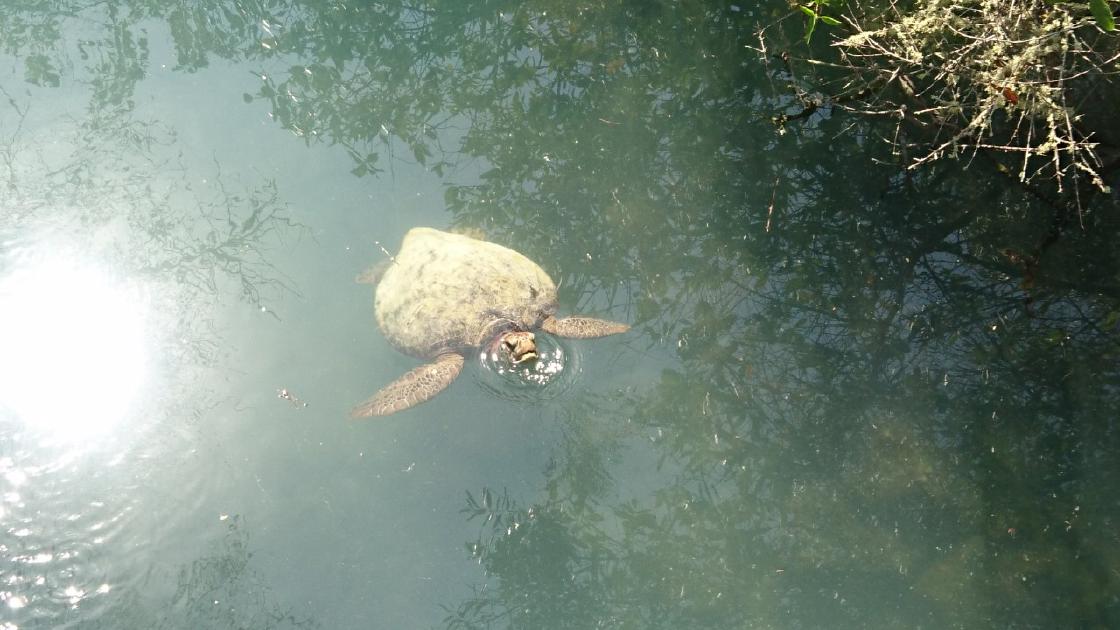 Spending one week on the Galapagos Islands enjoying the amazing wildlife. Diving with sharks and turtles, trying to find penguins, and looking at boobies.

It was time for one of the most unique places for wildlife in the world, the islands that inspired Darwin’s famous theory of evolution, the Unesco-listed Galapagos Islands. Unfortunately there’s a lot of other people who also want to see these islands and the prices for both flights, local ferries between the islands, and restaurants are pretty steep, and they’re pretty good at squeezing in extra fees everywhere just to make that extra money out of the tourists. But in the end it’s all worth it considering how unique the flora and fauna is and how much of it you get to see.

It’s actually really easy to see the wildlife. I hadn’t even gotten from the plane to immigration before I saw two iguanas basking in the sun, and once in Puerto Ayora, the largest town on the islands, there were iguanas, sea-lions, and turtles everywhere. And at night you can even see small sharks hunting around the docks.

And of course there’s also a lot of animals looking for a free meal at the fish market where people spend the afternoon filleting the catch of the day. The sea-lion seemed to do best at grabbing the pieces the fishermen threw away. Not much left for the pelicans.

If you just walk a little bit out of the towns there’s even more wildlife. Sometimes there are so many iguanas that it’s hard not to step on them, and one of the walk resulted in flamingos ranging from almost white to super pink.

The majority of the wildlife is however in the ocean and there are plenty of good snorkelling spots, both with tours or by just walking from town. The result was plenty of sharks, turtles, seahorses, rays, and even penguins (though only standing on the rocks). Many tour companies also provide free photos and videos afterwards, which is perfect since I don’t have an underwater camera.

But why only snorkel when you can go diving? The waters around Galapagos are a bit tricky though and many of the best dive sites require an advanced certificate, which I don’t have. Luckily most places in South America are pretty loose on rules and I got to go to Gordon’s Rock, a prime spot for sharks. The first dive was a little bit challenging with the currents and not as much to see as we were hoping for but all in all a good dive. But it was not what we went there for. The second dive got us a few Galapagos sharks but still not quite what we were hoping for, until just at the end of the dive when a big school of sharks, mainly hammerheads passed by. Exactly what we wanted to see, and they’re beautiful!

Not everything on Galapagos is about the wildlife though. The nature is also beautiful with a lot of black volcanic rocks and plenty of cactus trees (stem like a normal tree but branches like a cactus). One of my favourite nature spots was a small gorge filled with water and just perfect for a morning swim (believe it or not but I was up early every morning). But even when you’re not looking for animals they’re around. The iguanas really are everywhere!

And last but not least it’s time to raise the rating of this blog to PG because there will be boobies. The blue-footed boobie is one of the most iconic birds of the Galapagos and they are really funny to watch with a slightly confused face and a strong blue colour on their feet. It almost looks like someone painted them.

That’s all for Galapagos. An amazing week with hot weather, great nature, and a ridiculous amount of animals. But it’s also been a pretty expensive week so time to head back to the mainland.

Previous: Beaches, Mountains, and the Equator

Next: Art and Colours