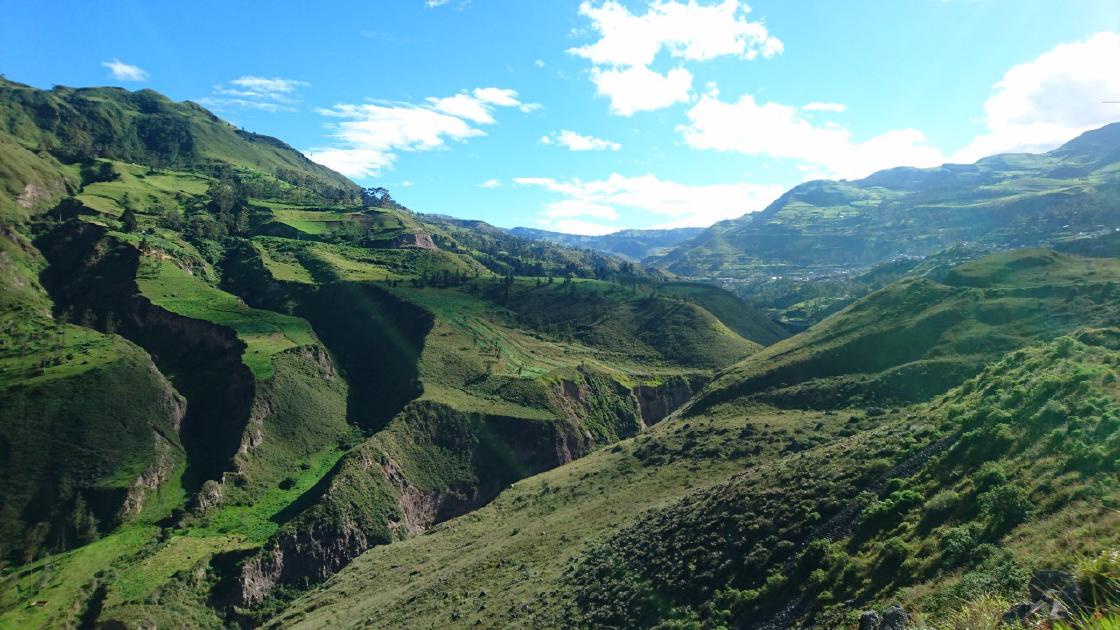 Beaches, Mountains, and the Equator

Spending some time on the beaches of Peru and Ecuador before heading up in the mountains again to ride a train across the Devil's Nose and to stand on the equator in Quito.

It was time to leave Peru and head to Ecuador. But to keep the bus ride down to a mere 20 hours instead of the 30 hours of heading directly to Ecuador I decided to make one last stop in Peru, the small beach resort Máncora. A few lazy days chilling on the beach and researching where to go next.

At this point I also decided to book a flight back to Sweden before the prices go up too much, which all of a sudden put me into planning mode to make as much as possible of the last few weeks of this trip. There will be a lot of stuff cramped into a short time period in Ecuador and Colombia, but first, one more Peruvian sunset.

The first stop in Ecuador was another beach resort, Salinas. This place is really popular among the locals but almost unknown among backpackers as they usually go to another place just a bit further north. I’d read that this place is usually either super crowded or almost a ghost town, but apparently I hit gold inbetween. It was the weekend, and also a fairly big triathlon competition going on. Busy enough for things to be open, but low-season enough to not be too crowded. Some more time on the beach and drinking beer with some of the locals.

After all the beach days it was time to head up into the Andes mountains again. 8 hours by bus on steep and windy roads to the small town Alausí. People drive like crazy all over South America and I’m surprised I haven’t been in or even really seen any accidents. Until now that is. Just around one sharp corner a car came at way too high speed downhill and somehow kind of bounced on the bus. No-one got hurt though, not even the people in the car, and the bus could keep going.

Alausí is a tiny town in the mountains and it seemed to have kind of a micro-climate. Every morning was sunny, every afternoon cloudy, and every evening the entire town was basically inside a cloud. As I arrived late in the evening I thought I would have a few days of bad weather but it actually turned out really well.

Alausí is famous mostly for a short but really complex part of the old railway crossing the Andes. I was here to ride the train, but the train goes every day of the week except one, the day I was there. This turned out to be a good thing as my hostel organised a hike with a great view of the mountains and the railroad. Turns out the hike has even better views than the train.

The next day I got on the train, and even if I was prepared that the views wouldn’t be as good as from the hike I still wanted to ride it due to it’s amazing but dark history. When this part of the railroad was going to be built Ecuadorian workers refused to work as the area was too dangerous and connected somehow to the devil. The steepest part is even called The Devil’s Nose. The solution to the workers refusing to work was to bring in other workers, mainly from Jamaica. The result was that more than half of the 4000 workers died from the altitude, yellow fever, snake bites, and dynamite blasts.

But even though it has a dark history the result is a pretty impressive feat of engineering. The short part that is still maintained as a tourist trip is only 12km long, but still manages a decent of about 1km. That’s quite a lot for a train! And to make it even more impressive it actually zigzags its way down the steepest part, not like a hairpin road with sharp corners, but by going past a switch, changing the switch, and then reversing for 1km past the next switch that, in turn, is changed before the train moves forward again. Seems a bit crazy, but if it works it’s not stupid.

Next stop after the train ride was the capital of Ecuador, Quito. Quito has a beautiful old town that is listed as a Unesco world heritage as it supposedly is the least altered historic centre in Latin America. And it’s also pretty much filled with churches.

After all my travelling I’m usually pretty fed up with churches but there’s one church that has a pretty interesting design. The Quito basilica is heavily inspired by Notre Dame in Paris but has the gargoyles replaced by the local wildlife, everything from penguins and condors to jaguars and anteaters.

I didn’t stay in Quito very long, but one of the days were May 1, and as in most other countries in the world this is Labour Day. But the demonstrations here were pretty different to any others I’ve seen. Not completely sure how to interpret it, but it’s definitely something about being slaves to capitalism.

The name Ecuador is based on it being situated on the equator and the equator is actually really close to Quito so I took a bus to the monument there. It’s a pretty nice monument with an exhibition about the various native tribes, as well as some experiments explaining magnetism and how the earth rotates in various ways inside it. Fun fact though. They built the monument in the wrong place. The actual equator is about 200m north of the monument.

Around the monument there’s of course the usual tourist restaurants and souvenir shops, but there’s also a small microbrewery so I went for a tasting. Not bad, and most likely the brewery closest to the equator in the world.

Since I’m running short on time I didn’t do much more in Quito, but while I was messing around with booking a flight home and everything I booked another flight as well. Tomorrow I’m heading to Galapagos!

Next: Swimming with Sharks