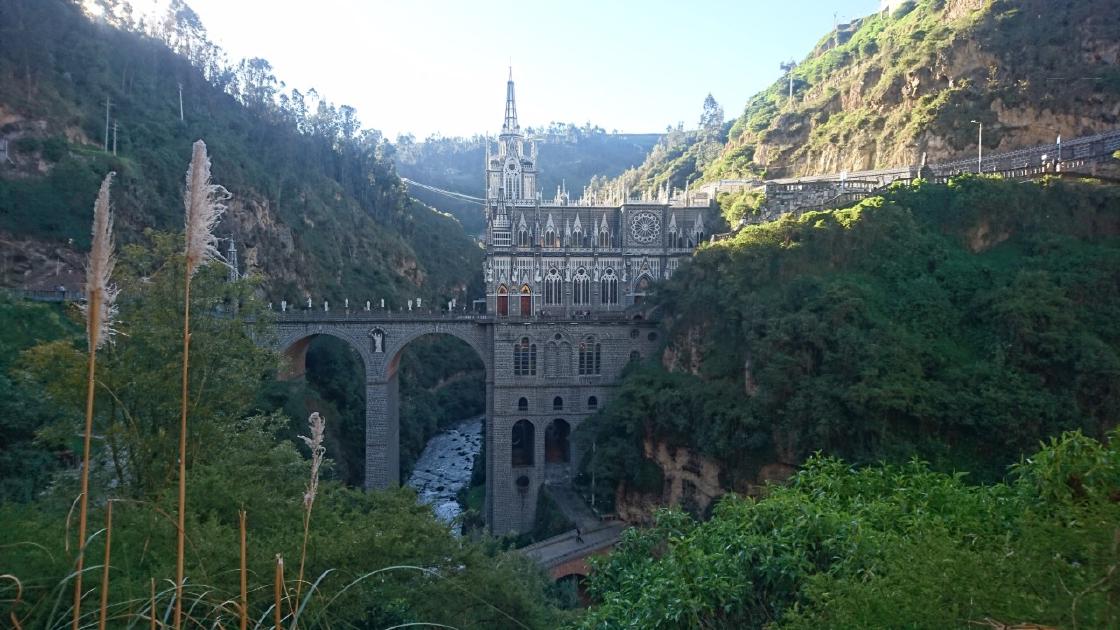 Crossing the border from Ecuador to Colombia. In Colombia I'm visiting Medellin, Guatapé, and Bogotá, all of which have plenty of colours and street art everywhere.

After Galapagos I had only about a week left of this trip so I set off towards Colombia. This border crossing was the most crowded one due to the current situation in Venezuela. At 30 minutes in total It was still pretty smooth though, partly due to the separate queues set up by each immigration office, one for Venezuelans, one for all other nationalities, partly because I was going to Colombia while most Venezuelans are making their way from Colombia and south. The crisis is clearly visible.

Once across the border I planned on going straight to Medellin but I had one quick destination in mind first, the church Santuario De Las Lajas.

Las Lajas is one of those places I randomly stumbled upon a photo of several years ago and have wanted to see since then. Yet another church, but the special thing about this particular church is the location. It is built to bridge a canyon. I’m not sure why they chose that location exactly but I’m thinking something like “We need a church. Can someone figure out the most complicated spot to build it in”.

One thing that surprised me about Colombia was the quality of the roads. Many of the main roads were made of really good asphalt, allowing the buses to keep a pretty high speed. Most of the roads are however also really windy, but why would a bus driver slow down for that? High speeds around tight corners and crazy overtakes. And it was still 21 hours to Medellin…

Medellin is infamous for two closely related things, Pablo Escobar, and that it used to be the most dangerous city in the world. It just to have a homicide rate of about three times that of the current most dangerous city in the world. This has changed big time and the city has instead gotten famous for the way it managed to turn around completely, with a big focus on education.

It is still not completely safe though and my hostel was in a neighbourhood where you better don’t go out by yourself at night. Even during daylight you can see some dodgy people here and there. Mainly harmless drug addicts asking for money, but you never know.

Because of the area it took a while to like the city and I’m still not sure why so many people recommend it so highly. But there are some things about the city I really like. First of all the street food, and particularly all the vendors selling cups full of mango pieces. I really don’t like to cut mango so I can happily support the extra work opportunities the locals get from providing it cut. Besides, it cost less than a euro anyway for a big cup. I probably had an average of two cups a day.

The other thing I really liked was all the sculptures and street art. There are loads of sculptures by the local artist Botero who specialises in distorted proportions, like a horse with huge legs and a tiny head. Exactly the kind of weird I like.

Another nice piece of art is an entire square covered in bamboo and pillars with led lights to symbolise hope. The square used to be a really bad place full of homeless people and drug addicts but was changed around to be a very pleasant place. And again, an important part of the city’s turnaround was education. In one end of the square is a big public library, and in the other end the ministry of education.

Another place that really turned around is the neighbourhood Comuna 13. It used to be known as the most dangerous part of the city, which says quite a bit for the, then, most dangerous city in the world. With some colours and street art (or more like a lot) it turned around and is now a popular tourist attraction.

But my favourite part of Medellin wasn’t in the city but two hours away. The tourist town Guatapé. Guatapé is located by a really beautiful lake and the town itself is really relaxed and colourful and perfectly safe. A nice break from the big city.

One of the main things to do in Guatapé is to walk up to the top of a huge rock just outside of the town. The rock has 700 concrete stairs to climb and once at the top the view of the lake is amazing!

After all this it was time for another night bus, 9 hours to Colombia’s capital Bogotá, where my flight back to Sweden would depart. I still had one day for the city though during which I mostly just wandered around. Surprise surprise, even more street art.

I did also take the cable car up to the hill Monserrate to get a view of the city. A nice little trip, until it started raining.

That’s all I had time and energy for in Bogotá. Only thing left now is 25 hours of flights…