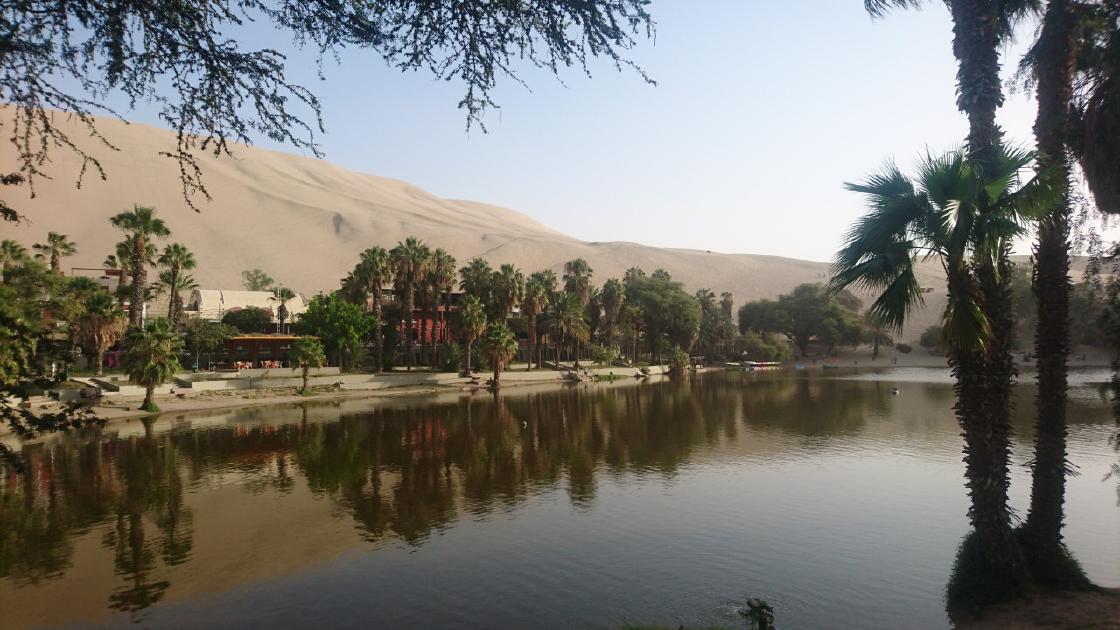 Finally getting down to lower altitudes and warmer climate. I'm visiting the desert oasis Huacachina, flying over the Nazca Lines, and watching the local wildlife (including penguins) in Paracas.

After two month at high altitudes (with only a couple of days in the Amazon as an exception) it was finally time to get down to sea level and warmer climates. First stop, Huacachina, a desert oasis. The town itself is pretty much only hotels, restaurants, and tour agencies, but it’s still really pretty with the surrounding sand dunes, and the sunsets are beautiful.

The main thing to do here, except for enjoying the views of course, is sand buggy tours. If you go on the late tour you start out with the sunset over the oasis, go on a roller-coaster ride over the dunes (the driver will make sure it’s bumpy), stop for a quick ride down one or two of them lying on a snowboard, and finishing up with a view of the oasis again just in time for when it’s pitch black and you can see all the lights in the town.

I did make a big rookie mistake in Huacachina though. I stayed in a party hostel. It was the kind of place where the average age most likely is way below 25 and the average number of hours of sleep per night per person most likely below 4, and with a music volume making sure that no-one gets more than a generous maximum of 6 hours. I’m too old for this kind of place, but at least it had a really nice pool.

One of the things I really wanted to see in Peru was the Nazca Lines and being only two hours away from Huacachina this was a good day trip. The Nazca Lines are a set of lines and drawings in the desert dating back up to 2000 years and the reason behind them is still a mystery but there are plenty of theories (some including aliens). They basically look like doodles and might not seem that impressive at first, but then you realise the sheer scale of it. Some of these doodles are several hundred metres long, and some of the straight lines over a kilometre. And this was created 2000 years ago!

The best way to see the lines is from a plane so I took a flying tour. It was a bumpy ride with a lot of turns and circles so that all passengers could see all figures, and having had a bad icecream the day before my stomach weren’t too happy. Most of the other passengers were feeling it too though so it’s not only the icecream. Luckily nothing came up and we could all enjoy the great views.

After the desert it was time to see the ocean again for the first time since Buenos Aires. This was celebrated in Paracas with some beach time. A really nice, sandy beach with only one problem. This is one of the windiest places in Peru. Every other minute there was a gust blistering you with sand. But it was still a really nice place for some sun and to smell the ocean.

Just outside of Paracas lies the Ballestas islands, a few small islands pretty much covered in birds and sea-lions. Tourists are not allowed on the actual islands but there are several boat tours going around the island for watching (and smelling) the wildlife. Lots of pelicans, a few Humboldt penguins, and even some really cute baby sea-lions!

And if the animals weren’t enough there’s one more sight from the boat during the tour, a 181m tall candelabra on one of the cliffs. Similarly to the Nazca Lines it’s unclear why it was created. Aliens again?

But now it’s time for a big city again. Next stop, Lima!

Previous: Hiking to a World Wonder