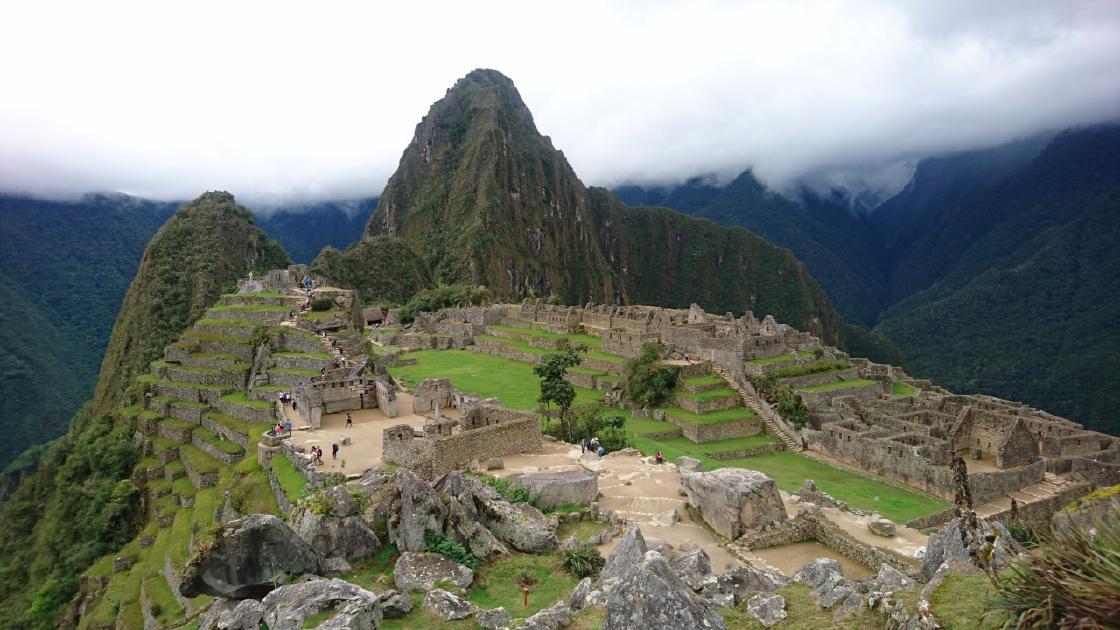 Hiking to a World Wonder

Hiking the Salkantay Trek to one of the new seven world wonders, Machu Picchu! But first a trip around the old Inka ruins of Sacred Valley.

After an overnight bus ride from the Bolivian border I arrived in Cusco, once the capital of the Inkan empire, and now the capital of tourism in Peru. The first thing to notice in Cusco is the many churches and the very colonial maim square. Okay, that’s actually the second thing. The first thing is all the people trying to sell you tours to Machu Picchu, drag you into a restaurant, or sell you a massage. It’s not Morocco-bad, but sometimes not far off…

That might seem like a lot of complaining but I still really liked Cusco. It’s a nice city to wander around in. The main attractions are however outside of the city. As a warm-up I took a tour of the Sacred Valley, a tour that stops at several different sites important to the Inkan civilisation and the civilisations before the Inkas.

I’m not going to mention all the sites here, but these three were my favourites:

First off, Moray, a bunch of crazy descending circular terraces. It is believed that this was used as a laboratory by the Inkas to experiment with and cultivate different plants. Each level has a different temperature and by having several pits with slightly different exposure to the cold mountain winds they could simulate different climates from tropical jungle to the cold highlands in one location to develop the crops and see what grew best where. Super advanced, yet so simple and low-tech.

Next up is the Maras salt pools where the locals have been harvesting salt since before the Inkas and is still in use. They even sell chocolate with salt in it in the gift shop.

And last but not least, Ollantaytambo, a town with a huge Inka fortress. Amazing how much remains even though the Spaniards did a good job of destroying and looting as much as they could.

But that was just the warm-up. Time for the largest, best preserved, most famous Inka ruins, and one of the new seven wonders of the world. Machu Picchu! However, due to its remote location, it’s not that easy to get to. The easy way is by train but that costs a small fortune. Starting at about US$50 and up to US$600.

The other option is walking. The classical hike is the Inka Trail. It’s supposed to be beautiful, with several smaller archaeological sites on the way. Only problems are that it’s extremely limited to preserve the trail, sells out months, sometimes more than half a year in advance, and it’s also pretty expensive.

There are other trails as well for people like me who don’t want to pay a fortune nor book in advance. I went for the Salkantay Trek. Voted one of the 25 best hikes in the world by National Geographic and possible to book with shorter notice (like 15 hours before).

The entire trek is pretty long but most tours opt for the best parts only and that was still plenty enough for my feet. Including Machu Picchu it ended up being an 80km walk over six days, and that includes a ridiculous amount of height meters. The hardest day started at an altitude of 3950m, went up to 4630m, and then down to the jungle at 2800m. And that entire afternoon was a muddy trail in pouring down rain…

Now it sounds like I’m complaining again, but with hard work comes great rewards. The scenery of the trek was amazing! Definitely worth getting completely soaked for. And there were some hot springs to soften up the body after the third day. Warm pools, small waterfalls with hot water to sit under (with a sign saying Inka Massage), and happy hour on Caipirinhas.

You’d think getting to Machu Picchu town is enough hiking, but no, then you have to get to the ruins as well. There are buses, but again of course severely overpriced. Or you can take the stairs of about 3000 steps. Yes, it was pouring down rain again, and it had been raining the entire night. The stairs were basically a waterfall. But apparently the rain also caused a landslide damaging the road during the night so the hikers still made it before the guide and the other people who took the bus.

Soaked to the bones I went up to one of the best viewpoints and saw, drumroll, nothing at all! Everything was covered in clouds. Did I go through all this just to see a cloud from above?

But I had plenty of time and eventually the rain stopped, the clouds cleared up a bit, and I even got some sun for a while. And Machu Picchu really is amazing! It is a lot bigger than I imagined, and even though there were a lot of tourists it wasn’t too crowded. The limited number of tickets and entry times really does help even if it’s a bit annoying. Out of the maximum 5 hours you’re allowed to stay on the ticket I ended up staying for almost 9 hours (no, they don’t check) doing some of the extra walks, waiting for clouds to pass, enjoying the scenery, and petting llamas.

But then I had to walk down all those stairs down again of course, followed by a 10km walk and a 7 hour bus back to Cusco the next day. Today is a rest day in Cusco before I do anything else, something my feet needed badly by now.

Previous: A Lot of up and down

Next: Sun, Sand, Air, and Water