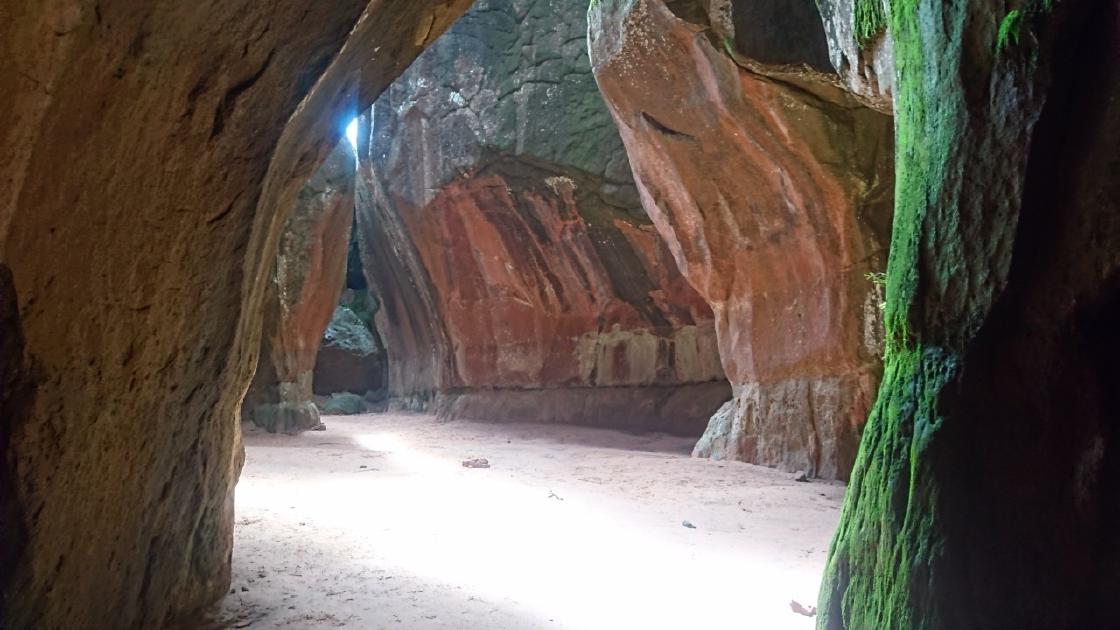 Next stop after Potosí was Sucre. Just as Potosí Sucre has a very much colonial architecture and it’s listed as a Unesco world heritage. But the vibe is pretty different. Potosí is a worker’s city, mainly because of the mines. This is a student city.

In the outskirts of Sucre there is a cement factory which, in the 90s, discovered a whole lot of dinosaur footprints. Since then an informational centre has been built (with life-size dinosaur models) and they’re hoping to get listed as a world heritage for more funding to be able to preserve the footprints better. 10 year old Jonatan would have been ecstatic. 29 year old Jonatan still found it pretty interesting.

Another popular place to visit in Sucre is Los Siete Cascadas, literally the seven waterfalls. The waterfalls are only a short walk from a road, but that means you need a car or a tour. The other option is the DIY way. Taking a bus to a village nearby and hike a few kilometres. It’s not actually that long of a hike, but there’s plenty of ups and downs and thorny bushes to make it a bit more of an adventure. And this is only for the first two waterfalls. The next two require a bit of wading and climbing. Not too bad on the way there, really hard to get back from. For the last three there was even more serious climbing. I didn’t even try to get there. All in all a nice day trip with some hiking, great views, and fun climbing and it turns out it was a good warm-up for Torotoro.

After Sucre I wanted to go to Torotoro National Park, a place I’d gotten highly recommended from several other backpackers. Pretty much the only way of getting to Torotoro is via the city Cochabamba so I did a short stop there as well. The bus schedules from Sucre to Cochabamba really didn’t fit me though so I opted for the other option, possibly the most dangerous thing on this trip, Bolivian minibuses. The minibuses are a bit more expensive than the full-size buses but quite a bit faster and generally a lot more frequent. There’s only two catches. Catch one, the don’t have a schedule, they depart as soon as they’re full. You might have to wait around for a bit but I was pretty lucky as my bus left after 15-20 min. Catch two, the drivers drive like lunatics, and Bolivian roads are either in pretty bad condition or super-windy mountain roads, sometimes both…

I survived the entire journey to Cochabamba, stayed one night, and did a little bit of sightseeing that turned out to be another good warm-up for Torotoro. Walking up the 1400 steps to Cristo de la Concordia. Not as good of a view as from Cristo in Rio, but not bad, and a lot less crowded. And I’m only doing 1400 steps one-way. I tool the cable car down.

One crazy minibus-ride later I arrived in Torotoro and was excited to see if it actually lived up to the hype. After two tours I could safely say that yes, it did.

The first tour was a halfday hike of about 9km along and in the Torotoro canyon. It started out just outside of town though with more dinosaur footprints. Not as many as in Sucre, but you could get really close to them and many of them had a clearer shape.

After walking a few kilometres we got to a viewpoint with some great views from the top of the canyon. I’d seen a photo of this view and this was why I wanted to do this tour. So beautiful!

But it got even better. The tour continued down a long set of stairs to the bottom of the canyon where we followed the river. Walking turned into wading and climbing over a few rocks to eventually get to the highlight of the tour, the Vergel waterfall, a spectacular waterfall hidden away in the canyon. A perfect place to chill for a while before worrying about getting back up along all those stairs in the burning sun.

The next tour was a full-day tour in two parts. The first part was a visit to the city of Itas. It’s not really a city, not even a village, but it was used as shelter by the nomadic tribes living in the area several thousand years ago and there are even some rock paintings. It does have some amenities of a city though such as a cathedral. It’s not a real cathedral, just a cave, but it does have the beauty and acoustics of a cathedral (top photo). Besides the cathedral cave there are several other, smaller caves, various rock formations that, with some imagination, looks like animals, and again, some really great views of the landscape.

The afternoon part of the tour was another thing I was really looking forward to about Torotoro. Caving in the Umajalanta Cavern. You start out by walking straight into a huge hole in the mountain-side and get as deep as 150 meters down from the start point through walking, climbing over rocks, ladders, sliding, crawling, and even going up and down a few ropes. It was exhausting and resulted in a few scratches but it was so much fun and there were some pretty impressive views inside the mountain. Great halls, subterranean lakes, and plenty of stalactites and stalagmites. This is definitely the best caving I’ve ever done!

That was it for Torotoro National Park. Now it’s time to head to the next city, La Paz!

Next: A Lot of up and down