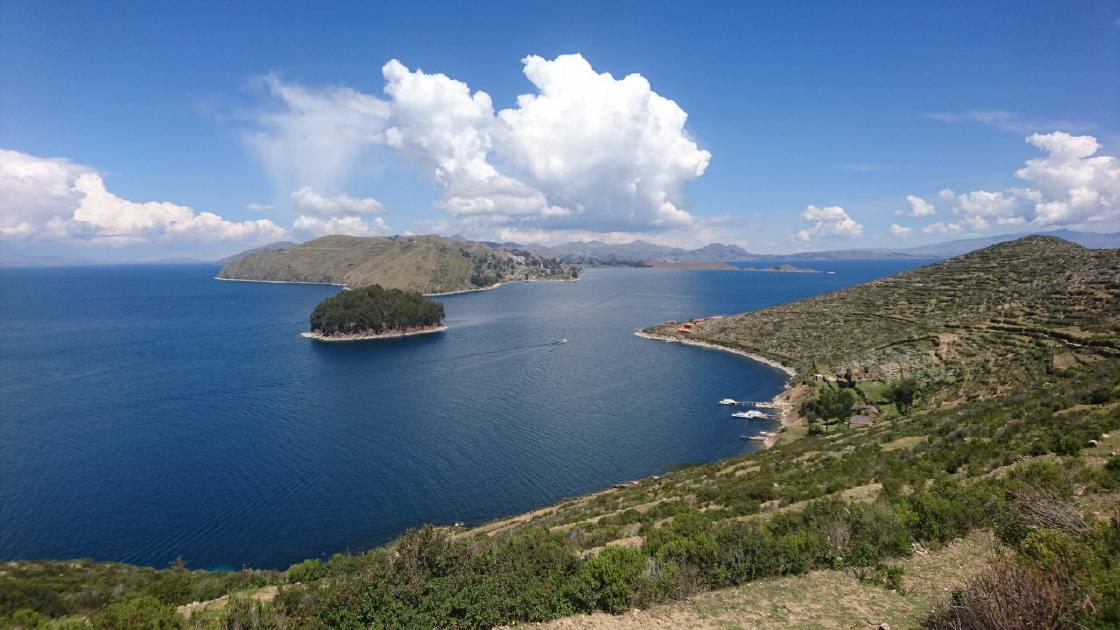 A Lot of up and down

A week with La Paz as a base with excursions to the Bolivian Amazon and the Death Road, and wrapping up Bolivia with a few days on Isla del Sol.

After a surprisingly comfortable overnight bus ride from Cochabamba I arrived in La Paz, the largest city in the country if you combine it with the city El Alto, and they have pretty much grown together anyway. The only difference is that La Paz is located in a valley while El Alto is on a high plateau, just a steep cliff side away from La Paz at about 4000m.

I didn’t actually like La Paz that much. It’s super-crowded with people and cars and really annoying to walk through, and the altitude combined with a lot of hills doesn’t really make it better. But the city does have some highlights. The engineer in me loved the public transport system. How do you build public transport in a city with a lot of hills and steep cliffs? Cable cars of course! This is definitely taking it a bit further than just a ski lift. The system has several lines and works almost like a metro, except you’re hanging in the air with a nice view. Perfect way of getting up to El Alto and down again.

Another good thing about La Paz is all the things to do not too far away from the city.

The first excursion was to the Amazon and for once I actually opted for a flight. 30 minutes by plane or 18 hours on a bus with a crazy driver (all bus drivers in Bolivia seem slightly crazy) on roads that are shitty at best and, after heavy rains, outright dangerous. I did see a bus on the road later during the tour and it was scary to even look at. Besides, the flight was pretty interesting. Only 30 minutes but with an altitude difference of 3800m (jungle at 200m, El Alto airport at 4000m). Flying back felt like going up in the air at take-off and then just going straight until the plane is on the ground at the destination. No need for a descent.

The jungle tour consisted of three days in the pampas/river plains with boat trips all over the place and a lodge on stilts along the river. And we didn’t have to go far to find animals. There were a few caymans hanging around at the lodge enjoying the leftovers from the meals and probably just waiting for a tourist to fall into the water.

During the tours we got to see plenty of animals, mainly birds and monkeys. The monkeys were really funny to watch when they were playing in the trees and some of them were curious enough to get on the boat and even climb over some of the tour members.

We were also lucky enough to find a small anaconda. Big enough to be impressive but small enough that the guides could catch it safely.

But the highlight of the tour, and the main reason I wanted to go, was to swim with the pink dolphins. Perfect temperature in the water and at least 4 dolphins hanging around while we had a swim. And they liked to play as well. An empty water bottle was a perfect toy.

All in all it was a great tour. A great guide, lots of animals, and a fun group. Only one exception. One member of the group was constantly grumpy, rude, and didn’t seem to like anything. It was one of those people you wonder why they even went on the tour to begin with. You meet a lot of weird people while travelling but this was bad enough to mention. Luckily the rest of the group was pretty great.

The next excursion from La Paz was one I really looked forward to. The Death Road! It used to be one of the most dangerous roads in the world with a lot of sharp corners, common landslides, sheer drops on the side, and about 300 deaths a year. It’s been replaced by a newer road for almost all traffic but the old road is still really popular as a tourist destination for mountain biking.

It’s a pretty long ride, almost 70km in total, but it starts out at 4700m and goes down to about 1200m so no need to pedal much. Long way down and then up again (by car). The guides made sure everybody could go at their own pace, even the faster ones who know how to handle a bike and want a bit more adrenaline. The road is still pretty dangerous though so full focus on the road. Only look at the scenery during the breaks! A lot of fun, and guess what, no-one died!

That was it for La Paz, and almost for Bolivia as well. But on the way out there was one more stop. Isla del Sol in Lake Titicaca. But to get there you have to go to Copacabana first, which in turn requires a small ferry crossing with the bus. And if it’s only a small ferry crossing it should be enough with a small ferry too, right? The ferry could fit the bus but not much more, and most passengers took another boat across.

Isla del Sol turned out to be a really beautiful island. Unfortunately, due to an old conflict between the villages, tourists are only allowed on a small part of the island but it’s still worth a visit. Titicaca is the world’s highest navigable lake at an altitude of 3800m, and with the sides of the island being pretty steep it was both cold (except for a burning sun whenever it was sunny) and tiring to walk all those trails and stairs. A lot of up and down…

The island is supposed to have a really nice sunrise and the weather turned out to be almost perfect. Really early, really cold, but definitely worth it. Saying goodbye to Bolivia in the best possible way. Next up is Peru.

Next: Hiking to a World Wonder