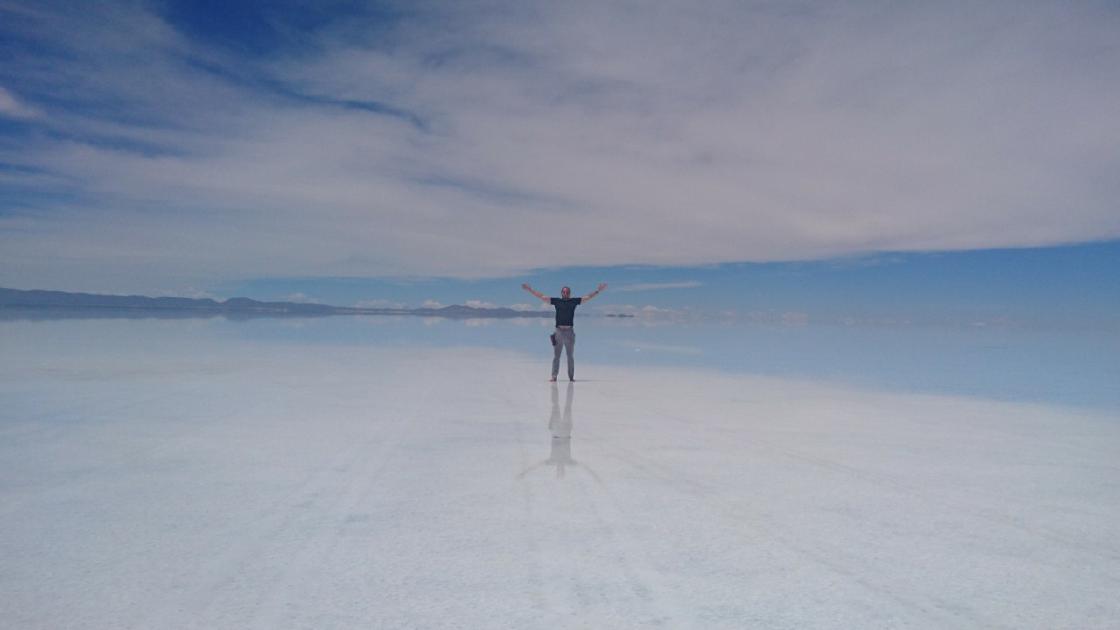 I'm entering Bolivia on a 3-day tour to the Uyuni Salt Flat and visit an old but still active silver mine in Potosí.

It’s been quite some time in Chile and Argentina but now it was time to visit a new country, Bolivia. One of the most famous places in Bolivia is the Uyuni Salt Flat, a huge flat and salty area which, during the rainy season, floods and turns into a huge mirror.

One of the most popular ways of seeing the salt flat is to take a 3-day tour that also includes some other sights in the area. Many of those sights are really close to the Chilean border so to avoid going far into Bolivia just to take a tour back to the border I opted for a tour from Chile instead. A little bit more expensive but I save time and money on not taking the regular buses and get a nicer border-crossing as a bonus.

And crossing the border was actually the very first stop on the tour. Remember that mountain from the last post? It is on the border and the immigration office is just next to it. Once all border procedures were done I was greeted by the 4x4 that would be my ride for the next few days.

The first two days were packed with colourful lakes, desert landscapes, crazy rock formations, and lots of llamas and flamingos. All of this at an altitude way over 4000m. Even the first night was spent on 4400m with a beautiful starry sky.

My favourite stop was however the geyser area Sol de Mañana. Still no hot water shooting several meters up in the air like in Iceland but the area was beautiful with a palette of colours from all the minerals, mixed with the fumes and boiling mud pools. And, again, with thermal activity comes hot springs. Not too far away were some pools with comfortably hot water for a bath. And this was just below 5000m. New altitude record for me!

The third day is the day of the main attraction, the salt flat. But first a short stop at a train cemetery just outside of Uyuni. A pretty impressive collection of old trains, but sadly it’s not maintained and everything is slowly rusting away.

The tour ended in Uyuni, a town that doesn’t have much more to offer than the salt flat I’d already seen on the way there so I went straight for the next place, Potosí.

Potosí is an extremely colonial looking city and was built for pretty much one reason only: for the Spanish empire to mine silver. It was so important that it ended up a Unesco world heritage (though they’re about to get the title withdrawn due to not maintaining the heritage properly). It was said that the amount of silver extracted from the mine would have been enough to build a silver bridge from Bolivia to Spain.

The city is also one of the highest cities in the world with most of the city at about 4000m. This makes the work in the mines even harder and many slaves died before they could even start working. The bones from all the workers and slaves who perished in the mines are supposedly enough to build a second bridge to Spain.

But mining is not only history in Potosí. The mine is still active and being worked in the same old ways with pickaxes, hammers, chisels, and dynamite. This also makes for a very controversial tourist attraction. Some people argue that it’s like a human zoo of the poor people working in the mine while others argue that it’s good that people get to see how bad the conditions really are.

I did the tour and it really wasn’t like a zoo. It was a tough few hours of walking, climbing, and crawling. And the miners do this every day, without bringing food, and also carrying up to 50kg of ore on their back on the way out. It’s a hard life and the workers often die early from collapsed tunnels or from all the dust but apparently still worth it as it pays better than many other jobs.

We also visited the god of the mountain, the god that takes lives but also can provide unimaginable wealth, and at the time he was decorated from carnival.

I was hoping to get a glimpse of the carnival celebrations in Potosí as well but there wasn’t much, only a few small groups parading sporadically and a lot of kids spraying you with water or throwing water baloons at you. And, to make it worse, pretty much everything was closed. It was even hard to find somewhere to eat. One place was open though, and it turned out to have possibly the best pizza in the world. That was dinner two nights in a row.

As soon as the carnival long weekend was over thing started opening up again and it was time to move on. Next stop: Sucre.

Next: Caves and Dinosaurs