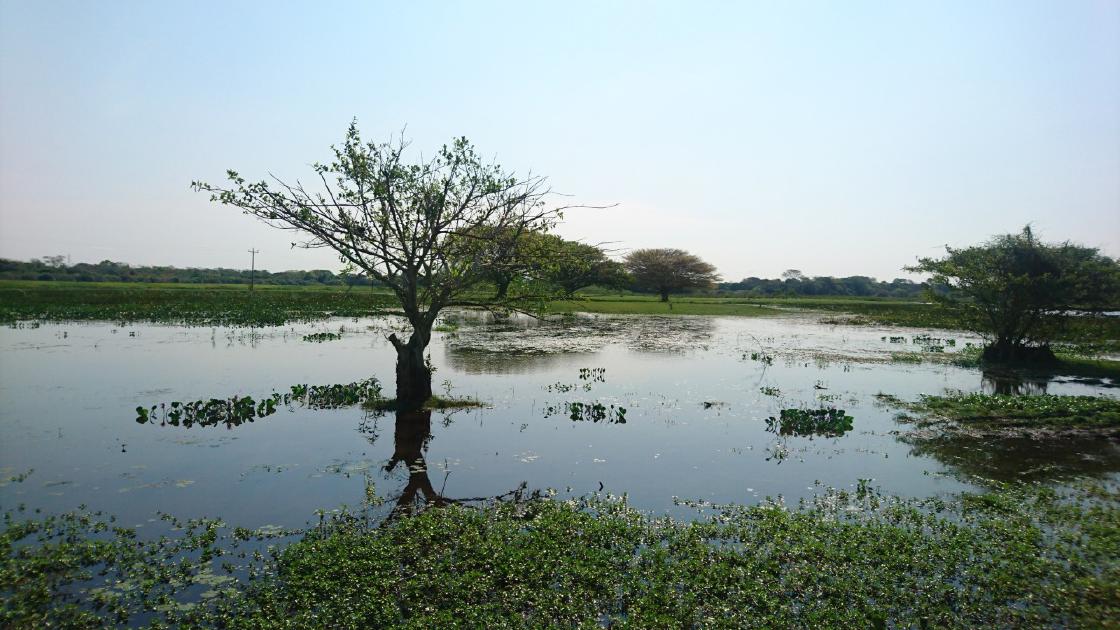 A Lot of Water

Two more stops in Brazil, Bonito and Pantanal, both of which include a lot of water in various ways. Snorkelling in a clear river, wading among the caymans, and fishing for piranhas.

Next stop, Bonito! Bonito is a small town in south-western Brazil known for ecotourism. The nature in the area is beautiful (which is also the direct translation of the word bonito) and the government have built up a system to protect the area while still making it available to tourists. The result is high quality tours with small groups, but with the downside of slightly higher prices and sometimes very low availability, which is a bit annoying when you travel like me, without planning more than a few days at a time. I did manage to get the two tours I was looking forward to the most though.

The first one was floating in the Sucuri River. It’s basically putting on a wetsuit, a life jacket, mask and snorkel, get into the river and just float with it for almost 2km. A very relaxing experience with a lot of fish of all sizes, as well as various birds and a few monkeys above the surface.

The second tour was a visit to Gruta do Lago Azul, an old cave with a small lake at the bottom which, because of how the light reflects, is blue. And not just a little bit blue like water commonly looks like. This was ridiculously blue! Unfortunately the guide only spoke Portuguese, but still an amazing sight.

After Bonito I went into the Pantanal for a few days. Pantanal is the largest wetland area in the world and a Unesco world heritage. Think Florida Everglades but the size of more or less the entire state of Florida. The area is not as famous as the Amazon but according to some people way better than Amazonas for spotting wild animals as it’s more open. It’s currently dry season though, making the land areas larger for the animals, which means they’re harder to find. I didn’t get to see quite as many animals as I was hoping for, but still a fair few different species, including a lot of birds.

My stay in Pantanal was at a fazenda/farm, in a room with only mosquito nets as windows and hammocks for beds. Fun to try for a few days, but when the days are close to 40°C I prefer a room with aircon and a normal bed.

During the days there were several excursions in various ways to see more of the wildlife. Safari by car, boat, horseback, and walking.

The most different part was probably the swamp walk, a walk between the higher areas that form islands in the wet season, by crossing the lower parts which are more or less always under water. I expected to only get my feet a bit wet but some parts of the trek were almost waist-deep. And to make it even more interesting the waters had plenty of both caymans and piranhas. But if the guide has done this for 15-20 years I suppose it’s safe enough…

Another slightly different activity that was more fun than I expected was piranha fishing. It was super simple as well. Just put a bit of raw meat on a hook, put it in the water a few times, and yank it when you feel a bite. But you have to be quick or the hook will be completely clean. I caught two big ones, and a bunch of smaller ones that we tossed back into the water. Back at the fazenda they cooked the piranhas for us for lunch. Not a favourite as I’m not a big fan of fish, and there wasn’t much meat on them anyway, mostly just bones.

After three days I headed back to Bonito to figure out the next leg. I want to get into Paraguay, something that after a bit of googling turned out to be more complicated than I thought. We’ll see how it goes…

Next: Entering Paraguay from Bonito