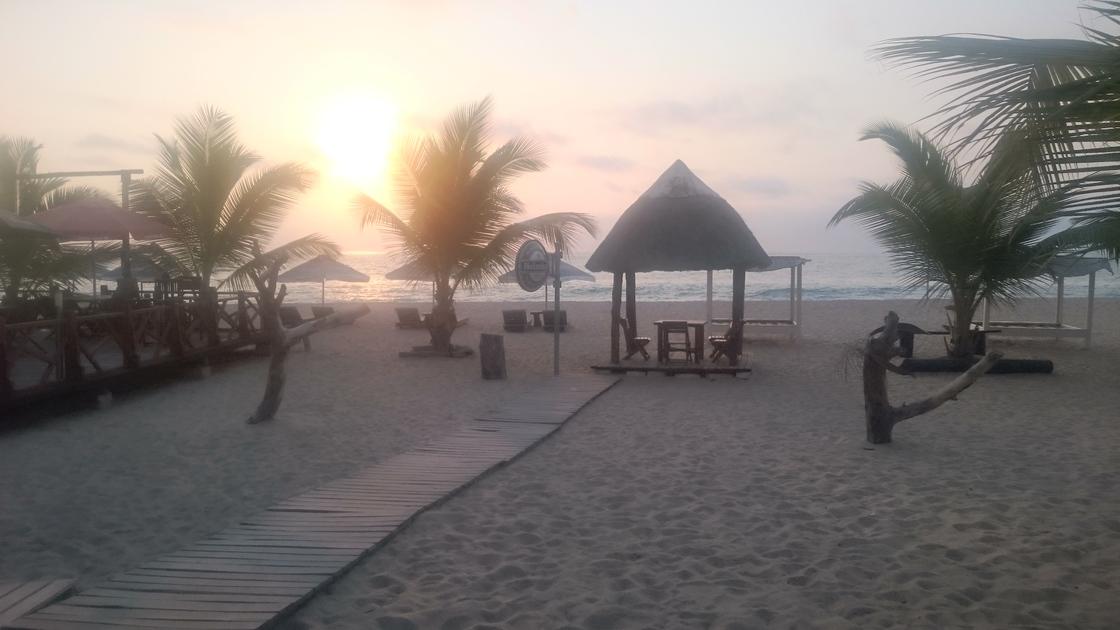 The Beaches of Angola

Enjoying a beach pretty much to ourselves in N'zeto, having a look around Luanda including a stop at the beautiful Valley of the Moon, and drinking cold beer on the beach in Lobito. We're also going deep-sea fishing.

When we finally reached Angola it was time to calm down a bit. No more deadlines! And what better way to celebrate than to find a fairly secluded beach and camp there for a couple of nights. Really nice with a few days of relaxing, swimming, and collecting shark teeth after two intense weeks on the road.

On the way south we stayed one night in a small town not too far north of Luanda. While some of us wandered around we got detained by some checkpoint police officers for not carrying our passports. A bit ridiculous since we drove past with the truck only two hours earlier and they saw all our passports that time. One guy got to go to pick up our passports while we waited, and once he returned everything was fine. When walking past the next time they just waved at us to not bother them. On the same walk we made a stop at one of the local pubs. It was basically like a small food truck with some plastic chairs and tables outside, and a fussball-table. Simple, but what else do you need from a bar really?

Angola’s capital, Luanda, is one of the most expensive cities in the world, so we didn’t want to stay around there for too long. We still had to have a look though and it was way more interesting than expected, mainly because of the many years of war, but also due to the huge oil revenue.

The first thing to notice about Luanda is the strong contrast in architecture. The city is full of more or less badly maintained communist-style residential concrete blocks side-by-side with huge modern skyscrapers belonging to the banks and oil companies. This is definitely the most western city so far on the trip with big supermarkets, nice parks, and even a really good waterfront walkway.

While in Luanda we also made a short visit to the old fort, now turned into a military museum. The museum itself wasn’t too impressive but the view from the fort was amazing and the entrance gate was pretty cool. They really seem to like mosaics here.

Just south of Luanda we stopped at the Valley of the Moon, a cliff that goes for several kilometres and holds some pretty cool rock formations due to the different kinds of soil and rocks eroding from the seaside. It’s supposed to be at its best at sunset but it was still a pretty good view in the morning.

Next stop was Lobito, a small coastal city where we ended up camping on the beach for several days. Another few lazy days just chilling on the beach, having a few cold beers and enjoying life.

We weren’t lazy all the time though. We managed to organise a full day out at sea with two small fishing boats, packed lunch, and quite a few beers. The main part was deep-sea fishing, in this case almost 70 meters, and we caught a fair amount which we had grilled for dinner when we got back to shore. Mainly red snappers and some smaller fish, but also a few groupers and a really cool coral cod. Add to that some sun, salty waves, and speeding around on the ocean, and you get an amazing day.

Now that we’ve all had plenty of time to relax on the beach it’s time for a few more nights of bush camping on the road towards the Namibian border.

Previous: Crossing a lot of Things

Next: Lions, Giraffes, and Jesus