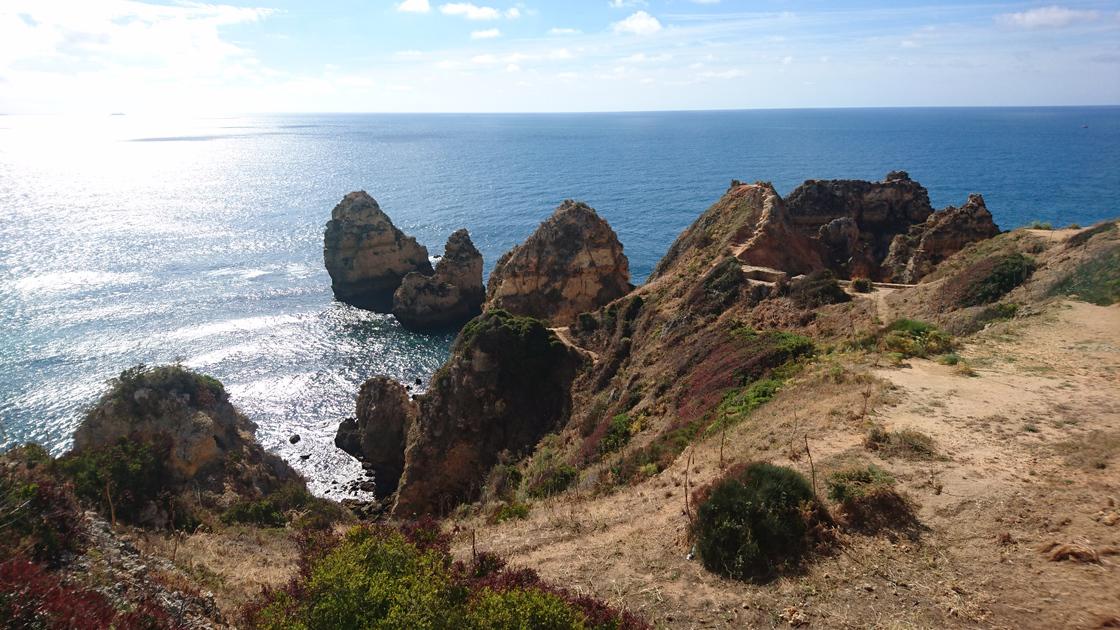 I'm spending a week in Portugal with Mom, driving from Faro to Lisbon with several stops on the south coast for some time on the beach and to see some caves. Then we spend a few days in Lisbon, as well as a few days around Sintra seeing one of my bucket list places, the Quinta da Regaleira.

Mom was going for a conference outside of Lisbon and decided to go one week early to see a bit more of Portugal. She asked if I wanted to join, so I took a week vacation from work to visit one of the few countries in Europe I hadn’t been to at that time.

We flew into Faro, a town that didn’t really impress me that much at all. It was so clearly focused on tourism without having too much to show for it. After an hour of walking through the old town you’ve seen most things. On top of that the airport is literally just next to the town, so mom and I made a game of trying to spy the airline of each of the planes taking off while we sat down for lunch.

Faro does have one nice thing to offer though, the national park Ria Formosa. The park is a lagoon/river system (depending on the tide) and offers some great views, pristine beaches, and some small old villages. We got on a boat tour around the area with a few different stops, a demonstration of the tide difference, and a nice view of the old town of Faro from the boat.

When we felt done with Faro we started heading west. The Portuguese south coast, the Algarve Coast, is littered with cliffs, small beaches, and limestone caves, and we did a fair few stops here and there to have a look around or go for a swim.

One place that I had seen several amazing pictures of and really wanted to visit was the Benagil Cave. The inside of the cave is shaped like a dome, with a round hole in the ceiling to let the sun in. And to make it even better the floor of the cave is a beach. I would’ve liked to swim in and have a look around but the sea was a bit too rough so I had to be content with a short swim on the beach not too far from the cave and then take a boat trip to see at least a bit of the inside. Next time I’m here I will do the swim!

Next stop was Lagos a tourist town with a really chill vibe, probably due to all the surfers going there. Good place to stop for a day or two. After a bit of a look around the town and surroundings we started heading north, and as we did the weather slowly started getting colder. We did a few smaller stops along the west coast, but once it started raining (as in pouring down) we set of for a non-stop drive the last bit to the capital. And, with perfect timing, the rain stopped just as we got out of the car.

Lisbon is a pretty great city with lots of things to see and do, and it’s definitely one of those places I would like to spend a bit more time. We had time to see quite a few things though, mostly through one of the free walking tours, which also talked quite a bit about fado, a kind of music distinct to Portugal. We never managed to see a performance though so that will have to wait until next time I’m in Portugal.

It would have been nice to spend more time in Lisbon, but there was one more place I really wanted to make time for in Portugal, Sintra, a small historic town north-west of Lisbon. But let’s not go there quite yet. We decided to make our way out of Lisbon along the coast to pass the district of Belém, famous for its Unesco-listed monastery, and the nearby Tower of Belém (listed together with the monastery). Ridiculously many tourist buses and crowds of hundreds of people kind of ruined the place, but the tower did pretty well on limiting the number of visitors so once through the queue it was pretty enjoyable.

Belém also has one more famous place that turned out to be one of the best stops on the trip, Pasteis de Belém. Pasteis de Belém is a bakery and cafe, and the origin of the Portuguese custard pastry Pastel de Nata. I was told that this was also the place in the world where you could get the best Pastel de Nata, both due to the history and the fact that they have so many customers that the pastry you get is rarely more than an hour old. Delicious!

After a drive and a few more take-away pastries to snack on we got to Sintra. Sintra and the small mountain it resides on the slope of is another Unesco-listed location due to its rich history and impressive architectures. First off they have an old Moorish castle built upon one of the peaks of the mountain. Mostly ruins, but still impressive, and with some really great views of Sintra and the surrounding area.

From the castle you can also see another peak with another construction on it, the Pena Palace. The funniest thing about this palace is how it’s been expanded over time, and each time in a different style. From far away it looks half red, half yellow, and already pretty cool, but up close it’s at least five different colours and styles. I wouldn’t say that it looks nice, but at the same time I like it. It’s something satisfyingly bizarre about the contrasts.

And now for one of the stops I’d been looking forward to the most; the Quinta da Regaleira estate, or more specifically its garden. The garden is completely packed with walkways, small waterfalls, ponds, caves, hidden tunnels, and the very best part, the inverted towers. Ever since I saw the first photos of the inverted towers I’ve wanted to see them for real and now was the time! The towers are more like wells with a staircase spiraling down around it leading down to secret tunnels under the ground. I was afraid I had way to high expectations of this place but it really lived up to it. A must-visit for anyone who likes weird and/or impressive constructions.

That was some pretty big stops in and around Sintra, and that’s not even close to all the sights. With these surroundings Sintra definitely deserves the tag Cool Town on my blog.

Before I had to head to the airport for the flight home we had time for one more short excursion not too far from Sintra, a trip to the western-most point of mainland Europe. The weather wasn’t the best so the actual visit became pretty short, but it was a good way to end the week. Bye Portugal, until I come back, cause this is a country I’d really like to see more of.

Previous: Going away for Christmas

Next: New Years in Cairo