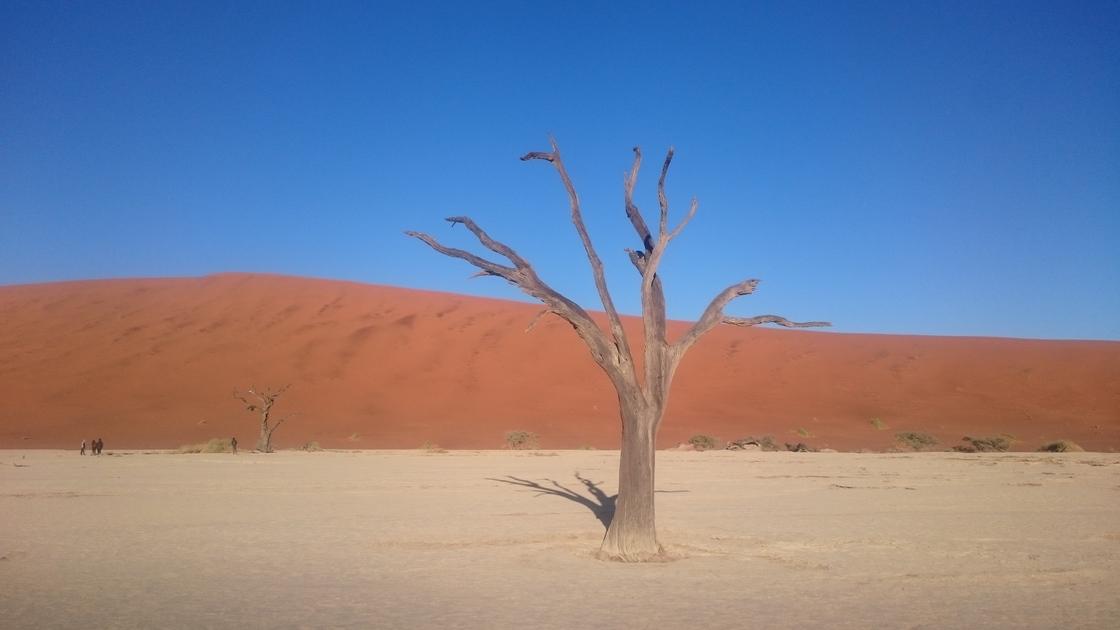 Driving through the Namib desert and along the Skeleton Coast, visiting Swakopmund and Windhoek. We go on a quad bike tour on the sand dunes outside of Swakopmund, and visit some of the largest sand dunes in the world in Sossusvlei.

After Etosha National Park we set course for the ocean again, and more specifically the town Swakopmund. Along the road we made a stop at a petrified forest, an area where fossilised trees have been washed up. The trees are about 260 million years old and solid stone but still look just like logs.

Driving through the desert is starting to take its toll on the truck and we had to stop a few times to let the engine cool down, but eventually we got to the Skeleton Coast national park. The park entrance was pretty much only a small house where we could pay the entrance fee, but they did also have a craft centre (read tiny shed) next to the parking area. Not sure how profitable that craft centre actually was, but we got a good laugh at least.

The Skeleton Coast has gotten it’s name due to its history of shipwrecks, and we did get to see a few of them, including what’s left of an old oil rig. The weather was against us though so we drove on without too many stops through the park and eventually reached Swakopmund.

Swakopmund was definitely one of my favourite stops on the trip. Really nice people, cheap and really good food, especially the meat, lots of things to do, and an amazing place to just stroll around or sit down at a café. There’s only one odd, but still very enjoyable, thing about the town. Except for the palm trees and people driving on the left-hand side of the road we might as well have been in Germany. Architecture, language, and even the beer is German-style.

Swakopmund is big on adrenaline sports so some of us in the group decided to go quad biking. We went for a guided tour on the sand dunes, had a really great time, and got to see some amazing views of the Namib Desert. I only got the quad stuck in the sand twice…

After Swakopmund we went to Namibia’s capital, Windhoek. Another really nice city to stroll around in, look at the German architecture, and enjoy the cheap food. My favourite spot was definitely Joe’s Beerhouse. Not mainly because of the beer, but for the great steaks. They served everything from beef and pork (including German eisbein) to gemsbock, kudu, and zebra!

The next stop was Sossusvlej, an area of the Namib Desert with several salt pans and home to the largest sand dune in the world, Big Daddy. We got up early in the morning to see the sunrise over the dunes and spent a few hours climbing up dunes and running down. Pretty exhausting but a lot of fun! Next to Big Daddy was Dead Vlej, a famous salt pan with several dead trees making for some pretty cool photos, and it’s even better in real life than in the photos. This is definitely a must-see place when visiting Namibia!

So many amazing places in Namibia, and we’re still not done. There will be at least two more stops before heading to South Africa.

Next: Second Breakdown, But We Made It!