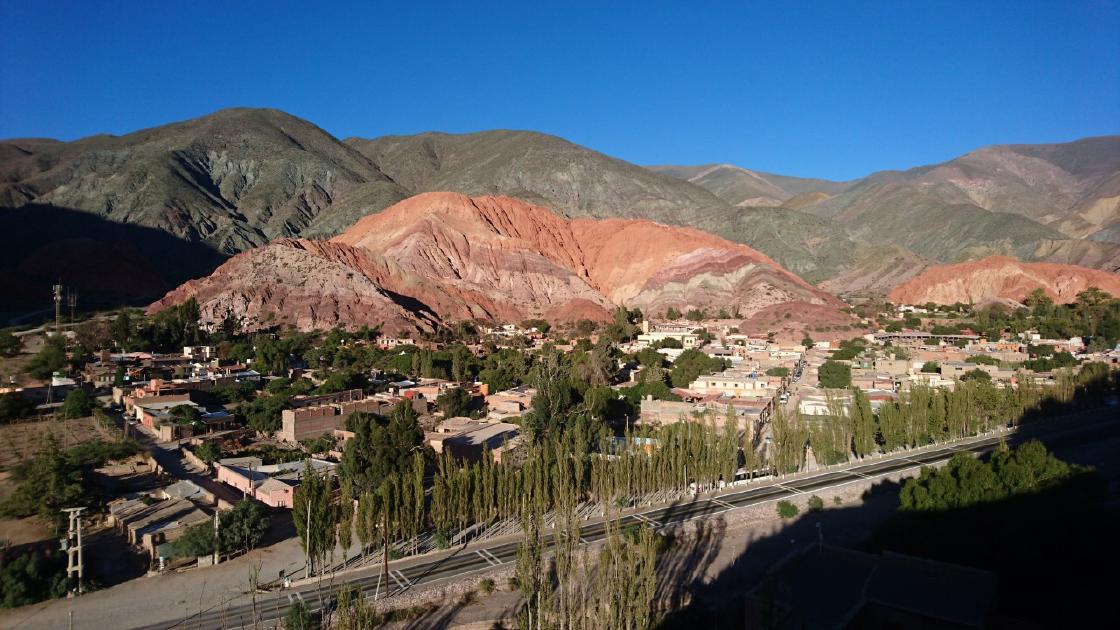 Checking out some colourful rocks in northern Argentina followed by everything from geysers to moon landscapes in San Pedro de Atacama in Chile.

Before leaving Argentina I wanted to do a few more stops, the small towns of Humahuaca, Tilcara, and Purmamarca in the Jujuy region. All three towns are included as a Unesco world heritage (known as Quebrada de Humahuaca) because of their importance for trade throughout history. But I didn’t go there so much for the history but for the landscapes. There are two places with beautiful coloured mountains.

The first one was Hornocal, or the mountain of 14 colours, a short drive from Humahuaca. But even if the drive is short it’s a lot of up. The viewpoint is located at an elevation of 4300m and included a short walk. The walk started out downhill (about 60m down) and wasn’t much of a problem at all. The problem was getting back up the hill as I really started feeling the altitude. I had to take a break halfway up and felt like I’d been running several kilometres just from walking up that hill. No other signs of altitude sickness though so I think I’m slowly getting used to these altitudes. And the view was amazing!

The next colourful mountain, Cerro de los Siete Colores, didn’t require a tour. It was even hard to miss as it pretty much surrounds the village Purmamarca. I got recommended to watch the sunrise there and the effect was pretty nice with the sun slowly revealing one colour after the other.

Tilcara is located in-between these two sites and I used it as a base to explore the region. The distance between the towns are small and it was easy to do day trips from here to the other places. It doesn’t have any coloured mountain next to it but it seemed like the liveliest town of the three. It also happened to be close to carnival and the celebrations had already started.

I also wanted to do one more stop in Chile before heading further north so I took the bus across the Andes to San Pedro de Atacama. This was another super-scenic bus ride with windy roads, salt flats, and a border crossing at almost 4300m.

Only an hour before entering San Pedro the bus passed two mountains. They didn’t look that huge from the bus but the left one, the almost perfectly cone-shaped Licancabur volcano, is about 5900m high and it turned out that it can be seen from almost everywhere in the area.

San Pedro de Atacama is a tiny but very touristic town. A lot of tourists go here for the extreme and beautiful nature. I wasn’t sure if I would be able to go at first as this place, one of the driest areas in the world, suffered a flood the other week. Apparently people had water to the knees in their homes and tourists were stuck in the town as even parts of the main roads were washed away and closed for a few days. Now it seemed to be completely back to normal though with the exception of some tour sites not being open.

It was quite a contrast to go from small towns in Argentina where only a few locals speak any English to this place where pretty much everybody knows how to sell things in English and assume my Spanish is more or less non-existent. This is Chile though so it’s pretty expensive, but I still found it worth the money to take a few tours in the area.

The first tour was to the Tatio geyser field. Apparently the geysers look their best at sunrise so all the tours started at 4.30 in the morning to make the 90 min drive in time. The field is at an altitude of 4300m, which made it pretty cold before the sun rose, just below 0°C but it warmed up quickly as soon as the sun rose and only an hour later it was shorts, t-shirt, and flip-flops. Each geysers were not that impressive compared to Iceland and it was more smoke than water spouts, but the entire scene was pretty impressive with smoke coming out of the ground in all directions. They also had a small hot spring with water straight from one of the geysers. Perfect for a morning bath.

On the way back to San Pedro the tour made a stop in Machuca, a tiny village at an altitude of about 4000m. It’s a cute little village with a church that looks almost like a small fort, and a good place to try freshly barbecued llama.

The next tour was to Valle de la Luna, the Moon Valley. The landscape looks like it could’ve been on the moon with crazy rock formations and sand dunes. The tour also included a sunset viewpoint but the sunset was actually surprisingly disappointing after all the other views.

The final tour I took in the area was to Laguna Cejar, a salty lake in the middle of the Atacama Salt Flat. And it’s not just salty. It’s super salty. It’s one of those lakes you can float in completely without effort. Just don’t be as stupid as me and try to dive. One, it’s very salty, which makes it impossible to get that far down anyway, and two, it’s very salty and will make your eyes sting for quite a while…

This tour also included a stop at Los Ojos del Salar, the eyes of the salt flat. Two deep, round holes filled with water, and you can swim in one of them. Not as salty as the lake and pretty much the only way to get in was to run and jump.

This has been a week of constantly being on an altitude above 2000m, most of the time on about 2400m, and with several trips up to about 4300m. Apart from hills being really tiring I haven’t really felt anything from the altitude the last couple of days and now it’s time to get even higher up. Hello Bolivia!

Previous: Through the Desert

Next: Salt and Silver